When I felt fear in the old days, I just felt fear. But since I learned about the law of attraction, which has become mainstream since the movie The Secret came out, things have gotten much more complicated. In a nutshell, the law of attraction means that like attracts like: positive thoughts attract positive things and negative thoughts attract negative things. So, basically, if I dwell on the things that scare the crap out of me, I’ll create them.

Now I’m scared of being scared.

On some level, this strikes me as wrong. Emotions are messengers that bear information for us, and we ignore them at our peril. They must be invited in, heard, and then released. Carl Jung said that what we resist persists, and being afraid to fear seems like resistance to me. If I resist fear, won’t I create what I fear?

Instead of resisting fear, what if I felt it, made a decision about how I’m going to respond to it, and then moved on? Fear motivates us to act like nothing else does, and perhaps I just need to work up the courage to feel and transmute it.

This works for me on a philosophical level, but on a practical level, I hate feeling fear. I have never understood why people go to horror movies.

But hang on a minute. What if my fear is just a judgment? Raising a son brings many opportunities for fear and watching Adrian has often made me wonder how our species survived. When he was younger, Adrian seemed to need to take risks. Life for him was a perpetual if-then loop. If I do this, then what will happen? It was challenging to balance his need to explore with my desire for him to survive his childhood. But he has survived, and all the things I considered risky did not turn out to be fatal after all. I feared for his life and in my fear, I judged many things dangerous that didn’t turn out to be.

Walt Whitman wrote “Be curious, not judgmental.” What if, instead of judging that whatever I fear (and indeed, fear itself) is bad, I were curious instead?

So, I was having a talk with my Spiritual Entourage (angels, guides, my higher self–basically anyone who would listen), about my worries the other day and said, “I want tangible evidence that you’re working on my behalf.” I was at a place where I had no interest in faith or positive thinking–I’d been doing that for months. I wanted proof that things were going to get better.

Then, at the beach, I found this cookie fortune on the ground:

I’ve actually been hoping for some good news–very specific good news–so it’s exactly what I needed to hear to put a little wind in my sails. Coincidence? Maybe. But it’s the second time in six months that that happened.

I was deer-in-the-headlights scared in November and took my son for a haircut. I got out of the car, looked down, and there on the ground lay a cookie fortune that said:

Is this normal? Do people just happen to be miles from a Chinese restaurant, park their car in exactly the right place and look down just before a puff of wind blows away a little slip of paper that could make them feel better? That doesn’t even take into account the person who dined at a Chinese restaurant, opened a fortune cookie, removed the fortune, liked it well enough to keep it, and lost it right where I’d eventually find it.

I’m not exactly sure what conclusions to draw from this, but one thing’s for sure.

Lately, I have been thinking of emotions as messengers. I’ve welcomed many of them–even negative ones.  So far, fear is the only messenger that I’ve wanted to kill. It’s the emotion that I’ve had the most difficulty sitting with and listening to. And as luck would have it, it has been pulling up a chair at my kitchen table often, lately.

“What?!” I say impatiently. “Why do you keep coming back?”

“I have a gift for you,” Fear replies.

“Yes. I will sit here until you respond to me.”

I am not in the mood to engage in a dialog with Fear. But I want him out of my kitchen in the worst way, so I decide to humor him and think about all the ways I could act.

“True,” Fear says. “You could literally abandon it, or you could withdraw from it emotionally.”

“I could get drunk.”

“You wouldn’t feel the fear so much then. You could also engage in activities that distract you from what you fear.”

“I could deny that what I fear exists,” I say.

“True. But are those your only choices?”

“How would you do that?”

“I’d come up with ideas for overcoming what I fear and decide which idea is best.”

“Then I’d implement my idea.”

“How does that make you feel?”

“A little more empowered. I feel less like a victim of fate. By taking matters in hand, I feel more like I’m the master of my own destiny.”

“Are those the ony feelings that come up for you?”

“No. I like brainstorming, coming up with new ideas, and solving problems. It makes me feel creative.”

“That,” says Fear, “Is my gift to you.” He pushes back his chair and gets up to leave. 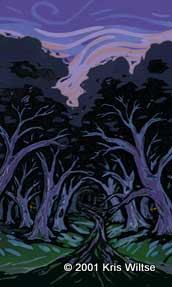 The illustrations, by Kris Wiltse, are from the “Afraid,” “Empowered,” and “Creative” cards, which are part of the Mixed Emotions card deck.

I’ve heard many times that the opposite of love is not hatred, as you might expect, but fear. The implication, of course, is that love is good and fear is bad. But I recently read something that has me thinking. Fear is what keeps us alive.

We’re born with a fierce survival instinct, and all of us have felt it first-hand. Near-misses, such as swerving to avoid a collision with a cement truck, trigger a surge of adrenaline that prepares us to fight or flee. Our initial feeling is fear, which is followed (almost immediately) by a hormonal surge that equips us to do something about it.

If it weren’t for our built-in fear of death, we’d step out of our lives at the first sign of discomfort and request a cosmic do-over. Fear keeps us on the planet.

The fear of death can erode, however, and when it does, we have a safety net. Holocaust survivors, prisoners of war, and victims of torture have survived unspeakable suffering because of the love and responsibility they felt for their families.

Usually, we are kept alive by two layers of emotions: fear of
death and the love and responsibility we feel for our families

If we lose our fear of death, feelings of love and
responsibility keep us fighting for survival

When you have lived a full life and come toward the end of your years, the fear of death naturally erodes. Knowing that your loved ones can care for themselves gives you peace of mind, and you can allow yourself to relax your grip on life. When my grandfather was in his late eighties, he said, “I just want to go home.” We adored him and were very sad when he died at 89, but we knew it was what he wanted.

A well-lived life isn’t the only thing that causes people to relax their grip, however. Sometimes, depression and mental anguish become so great that they extinguish all emotions, including the fear of death and feelings of love and responsibility. This causes a total eclipse, which can lead people to put a permanent end to their own suffering.

A year ago day today, my friend Marc died of a total eclipse. I’ve thought a lot about how and why his safety net eroded. Obviously, Marc lost his fear of death. But what about the love and responsibility he felt for his wife and twin 11-year-old sons?

Clearly, all of Marc’s emotional systems failed. Marc thought he was ending his own suffering when he pulled the trigger. He didn’t realize that his suffering would increase exponentially as it passed to the wife, children, parents, siblings, friends, and colleagues who would, on some level, be grappling with his death for the rest of their lives.

I alternate between feelings of compassion and empathy (because of the despair that Marc died of) and anger (because of the pain that he forced the rest of us to live with). On some level, I guess I also feel a little envy. Marc’s pain is gone. Mine will remain for a long, long time.