My friend Marc committed suicide last September, leaving behind twin 11-year-old sons. I hated him for that, and yet felt compassion for the anquish that led him to end his own life. As I sat there at his memorial service, looking at the backs of his sons’ heads, I thought, how do you explain this to children?

I rememberd a seminar that I attended some time ago. One of the participants told the speaker that she was afraid that her mother, who suffered from depression, would commit suicide. The speaker said, “Every death is suicide.”

I’ve been thinking about that statement ever since. What the speaker meant was that we all have far more control over the circumstances of our lives and deaths than we realize. Of course, that presupposes several things–namely that: 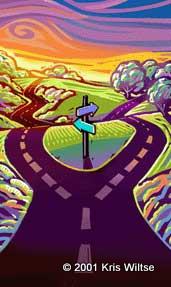 Even though these things are all part of my belief system, the “every death is suicide” statement came as a surprise to me. I’ve lost quite a few people that I cared about. Too many of them were young and three died at their own hands. If all their deaths were “suicides” it means that none of their deaths were accidental, tragic, or premature. None of them were victims, because the way they died was part of the agenda they set before they were born.

I have found comfort in that.

The story I’m writing for Marc’s sons illustrates what I have come to believe–namely that emotions are the way we receive guidance from our higher selves. The way it works is extremely simple: When we feel good, we’re on the right track and when we don’t feel good we’re not. That is why I trust my heart. And that is why I call emotions the GPS for life’s journey.

The illustration, by Kris Wiltse, is from the “Unsure” card, which is part of the Mixed Emotions card deck.